Another Single Male robbery in Istanbul in January 2014, this one with some differences: it started near the Blue Mosque, the initiator said he was Russian, and the victim got most of his money back with the help of the police—though it was still a bad experience:

“My name is Joseph, I am a Latin American traveler. I was in Istanbul in early January this year and was a victim of the scam “let’s have a drink”.

“The situation was similar to that described other travelers . I walked at 8 pm near the Blue Mosque, and a man who claimed to be Russian tourist invited me to go to lunch, I said yes.

“He took me to a bar called Bar Civani, coffee and Rest. ( http://civanirestaurantbar.com/ ) only drank two beers with two women who were saying drinking Gin and Tonic .
We had to pay when they were 3800 TL and I had to pay half . Would not let me pay by credit card and took me to a nearby bancomat .

“Then they sent me home in a cab .

“They came two men claiming to be ” translators ,” the police chief just chose one of them.

“I managed to recover 80 % of the money paid in the bar. But I spent seven hours in the police station. Besides having a very hard time.

“Hope this helps other travelers .” 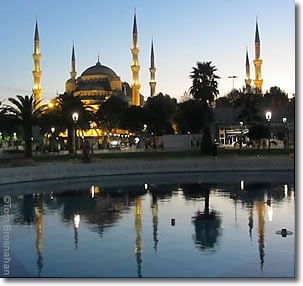 The Sultanahmet (Blue) Mosque in Istanbul— a place you’d think you were safe….