Single Male robberies continue in Istanbul. I received this one in late May 2014 from a 30-year-old European traveler:

I was just reading the let’s have a drink scam stories on your website. It’s great that you have this website. I wish I’d read the stories before visiting Istanbul the day before yesterday, however. In case you want to post my story on your website, I’ll share my experience of losing about 300 euros in this scam. Please feel free to share it with anyone, condense it if you like, but don’t mention my name.

I arrived in Istanbul around 10pm and was only stopping over for a day, traveling somewhere else. I figured I’d take the opportunity to explore Istanbul a little bit. After arriving at my hotel near cemberlitas I decided to go for a walk before going to bed, I was told the area was quite safe at night.

I had a nice walk and just before I reached my hotel on the way back two guys in a car stopped and asked me for directions. We started chatting and chatted for quite a while, maybe 10 minutes. One of the guys said he was Italian (one of the reasons I trusted them), and the other one was Turkish. They said they worked for a bank and were in town for business. Near the end of the conversation they asked if I felt like coming for a drink. In hindsight there were lots of red flags, but I was in a good mood and didn’t feel like sleeping yet, so got in the car.

They took me to “club rio” nightclub in Aksaray. As soon as I walked in I realized it was a shady place, there were girls that looked like escorts, etc. Still I decided to stay, have a drink, and then go home. Again, in hindsight I don’t understand why I still went along with them. We sat down at a table and they ordered a bottle of raki and some food. We sat and after 15-20 minutes some girls came over, started talking to us, and ordered some drinks. I talked to a Russian girl for not more than 5 minutes. Before we stopped talking I remember she asked me something like “Do you realize what kind of place this is?” I wonder if she tried to warn me.

Then I went to the bathroom, and when I came back the girls were gone, there were many opened bottles of vodka, jaegermeister and some other stuff on our table, and one of my ‘friends’ asked for the bill, which was 9000 lira (+-3000 euros). They said we’d have to split it three-ways, but the Turkish guy professed to be generous and “offered” to pay 3200 because he ordered the bottle of raki.

Only now I realized I was being scammed and immediately objected, said I couldn’t pay, was only carrying 60 liras, and would use that to pay for what I drank (two glasses of raki). My two “friends” were still pretending to be victims too, and said they’d like to pay more, but their cards had a limit. I still refused to pay and told them that they should pay for me, since they took me there. Then the manager/owner was called, who escorted me to a backroom together with a bunch of bouncers.

There I was surrounded by the bouncers, the owners, and my “friends”. First I kept saying I had no money, but then they threatened me and started searching my pockets. They took out my wallet, and forced me to give them the 100 US dollars I had in there. I started feeling sick and asked to go to the bathroom, but they wouldn’t let me.

They saw I had a credit card in my wallet, and said they would go to the ATM with me so I could pay the rest of the bill. I objected again, and they threatened me again. I felt I had no choice but to go with them. The owner/manager of the club, my Turkish “friend” and a bouncer escorted me outside and put me into a taxi that was waiting in front of the club. In the taxi my Turkish “friend”, seeing I was scared told me “Don’t worry friend, no one is going to kill you over 500 euros”, which wasn’t that comforting…

They took me to one ATM, in which my card didn’t work, then they took me to another, in which my card worked. Luckily I’d already used most of my credit on that card for buying my plane ticket. We tried 1500 lira first, which didn’t work, and ended up getting out 700 lira which was given, with the receipts, to the club owner. They took me back to the club, my turkish “friend” pretended he settled the rest of the bill, and then they let me go. The two guys offered me a ride home but I told them the last time they offered me a ride it didn’t end so well.

I immediately ran to a nearby phone shop and called my bank to cancel all my cards. (I was carrying another bank card in my wallet which I miraculously lost that evening). Then I went to my hotel, told the clerk at the desk what had happened, who responded that it’s a quite common thing. He recommended that I go to the police, which I then did.

In the police station nobody spoke any English, so I proposed to use one of their computers, and told them what happened using google translate. When they got it, the officer in charge of the station immediately went back to the club with me, in a police car, to try and get my money back. However, by the time we got to the club, it was already closed and there was nobody there.

I was brought to another police station where I spent the rest of the next day filing the report and getting a police statement. This was at the police station at Aksaray. The officer that helped me was very helpful and kind. Since I didn’t have any money they gave me breakfast and 10 lira to take the metro back to the airport to catch my flight and buy some food and water.

I was also impressed that at the gate of my flight, two police officers in plain clothes came to meet me before I boarded my flight, because there was something omitted in my police statement. They came with a new report and needed my signature.

The police also explained to me that at this point the chance of doing something / getting the money back from them is quite small, as it would be my word against them. The only thing that might help is footage from the security cameras at the ATMs. I think there might be some incriminating footage on there, as one of the guys took my credit card at one point.

I agree with what someone else on your website said: I think this is more of plain robbery than a scam, it came down to intimidation and threatening with violence.

I also feel like the guy of one of the other stories: I’ve traveled to many places in the world over the last 12 years, also plenty of places considered dangerous, know that these things can happen, and am generally quite cautious, especially with strangers striking up conversations with me, for some reason just not at that time. Except for this I’ve never been robbed, and I guess I thought it would never happen to me.

If it would happen again there would be many things I’d try to pay attention to and think of. For example later I realized it would probably have been smart to somehow make clear I was being robbed in front of the atm, in front of the security camera, to have incriminating footage afterwards. Also, I wonder what they would’ve done if I tried to run at that point or refuse to get back into the taxi. At that point I just decided to do everything they asked though, as I had no idea what they might do. Do you have any thoughts on this?

One last thing I wanna say to other people that experience this: when something like this happens it’s quite normal to be angry at or feel bad about yourself for not having acted differently/better, and you tend to run the situation over and over in your head, and think of other things you could’ve done. Don’t dwell on that feeling too much though, you were just the victim of a crime…

In spite of this experience I’m still planning to visit Istanbul another time, and see a different side of it, and hopefully pay back some people that helped me after this happened.. 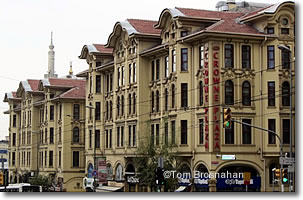 The historic Tayyare Blok building, now a hotel, in Laleli, near Aksaray.