On October 23, 2011, a major earthquake struck eastern Turkey near Lake Van. The cities of Van and Erciş, on the lakeshore, were particularly hard-hit, with the number of dead in the hundreds, of the wounded in the thousands.

Terrible as this tragedy was, it’s important to remember that Turkey is a big country: Istanbul is 1,666 km (1,035 miles) away from Van and Erciş; Turkey’s Aegean coast is equally distant, Ankara and Cappadocia are 1,300 km (808 miles) away, as are most other areas of Turkey that are visited by vacation travelers.

99% of Turkey has not been affected at all by the earthquake.

I was in Turkey when the earthquake struck. (I still am as I write this.) Specifically, I was in Kaş, on the Mediterranean coast. I learned about it the same way the rest of the world did: from news reports and email messages. Otherwise I would have had no idea. Kaş is 1,650 km (1,025 miles) away from Van, about the same distance as between Copenhagen, Denmark and Florence (Firenze), Italy, or between New York City and Tallahassee, Florida.

Turkey is in a seismically-active area and so, as in California, Chile, Greece, Italy, Japan, Mexico, and many other areas of the world, earthquakes occur periodically, without warning. Like traffic accidents, heart attack, and other mishaps, whether a given person is affected is often a matter of luck.

The recent quake should not affect your plans to visit areas of Turkey that have not been directly affected by the tragedy (which would be places around Lake Van—map).

As for other areas of Turkey such as Istanbul, the Aegean coast, the Mediterranean coast, Cappadocia, etc., you may want to think this way: if you would feel OK visiting San Francisco, or Mexico City, or Tokyo, or any of a thousand other places on earth that are in earthquake zones, you should not fear visiting Istanbul, or other destinations in western, central, northern, southern, or even parts of eastern Turkey, because the risk of a seismic event is roughly the same. 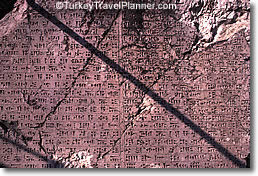 Cuneiform inscription (c. 800 BCE) in the Rock of Van, outside Van City. Earthquakes have happened here for millennia.