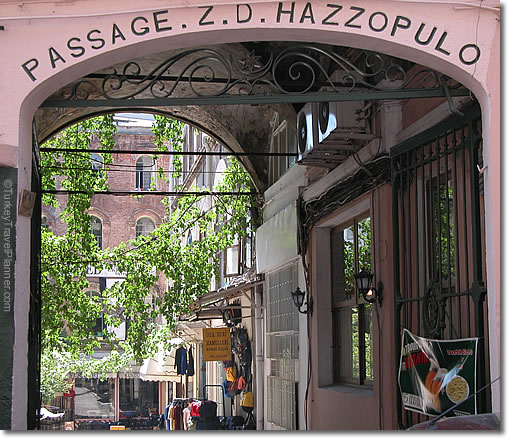 In recent years, Beyoğlu has been rediscovering its 19th-century heritage. This gateway into the Hazzopulo Passage was restored in 2002, along with an adjoining restaurant.

Pera (Beyoğlu) was populated mostly by the sultan’s Greek, Armenian and Jewish subjects, and many foreigners. Greeks were most prominent, and the Hazzopulo Pasajı had cafes and rstaurants, shops and galleries owned by Ottoman Greeks.

A side passage leads to the secluded Church of Panaya İsodyon.

It used to be possible to make your way through Istanbul—especially Pera/Beyoğlu—speaking Greek, but the Cyprus crisis of the 1950s and ’60s put stress on ethnic minorities in both Greece and Turkey.

Many Greeks with Turkish citizenship emigrated to Greece, and Turks with Greek citizenship came to Turkey, continuing the trend away from the multi-ethnic, multi-lingual, multi-confessional Ottoman Empire and toward the modern ethnic nation-state.

I’m not sure it’s the best thing. At some point, we’ve all got to live together.