Fatih, the district around the Mosque of Mehmet the Conqueror (Fatih Camii), is among the most traditional and conservative parts of Istanbul. Many of the old ways survive and prosper here, including in their cuisine and dining.

Traditional foods and ways of preparing them are paramount here, with Kurdish- and Arabic-influenced dishes from southeastern Turkey prominent.

Grocery shops dot both sides of the street, displaying the culinary riches of the eastern and southeastern cities of Erzincan, Siirt, Van and Diyarbakır: cheeses of goat, sheep and cow’s milk, some braided, some with herbs in), spices, a bewildering choice of honeys, and yogurtsincluding manda yoğurdu (water buffalo)—the richest.

Choose an appealing restaurant, sit down with a group of friends, order büryan kebap (pit-steamed lamb), and you’ll be brought a large tray covered in flat bread, topped with salads, vegetables, pickles, and succulent morsels of meat. Everyone dines from the same tray, scooping up bits with flaps of fresh-baked flat bread. The only eating utensil is a large spoon used for soups and stews.

Another traditional dish is perde pilav, a rice pilav of partridge or chicken, almonds and spices baked slowly in a thin egg-pastry “cloak.”

This is Ottoman-style dining. It’s great fun, and the food is delicious and not expensive.

Among the more popular restaurants here is Siirt Şeref Büryan Kebap Salonu (Şeref Büryan [sheh-REHF bewr-YAHN] for short), İtfaiye Caddesi 4. Another is Sur Ocakbaşı (SOOR oh-JAHK-bah-shuh) at İtfaiye Caddesi 19 near the intersection with Tezgahçılar Sokak, but many of these restaurants are suitable. Stroll up and down the street until you find one you like. In fine weather, most have tables outside, which is even better.

Interested in southeastern Anatolian cuisine? The Öz Kilis Lokantası, Hırka-i Şerif Caddesi, off the beaten track at Bedrettin Simavi Sokak No. 5 (map; tel. (212) 523 4457), specializes in dishes as they are made in the city of Kilis, just a few kilometers from the Syrian border north of Aleppo (Halab, Halep). The garlic soup is tart, savory and delicious. Hot pepper and mint are more in evidence in their dishes. They stuff dried eggplant/aubergine for patlıcan dolması, and prepare a variety of spicy kebabs. The pide (Turkish-style pizza) and lahmacun (extra-thin pizza) are fresh and tasty, made right before your eyes.

If the ground-floor room is crowded, climb the stairs to the upper dining room, which may be more comfortable. 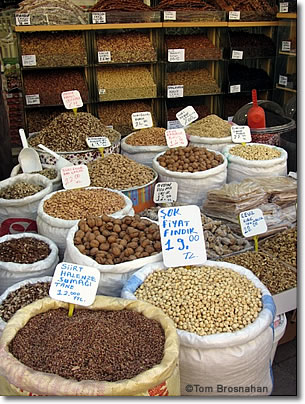 Above, a spice shop.