Turkish is a language of the Ural-Altaic family. It’s quite logical, with no gendersand only a few exceptional rules, but its agglutinative structure is so different from Indo-European languages that speakers of those languages may find its grammar a challenge to learn at first.

(Agglutinative means that words and sentences are made by adding suffixes to a root-word.)

A Turkish word starts with a short root (such as git-,‘go’). One or more suffixes are added to modify the root (gitti, ‘s/he went’). English uses only a few suffixes, such as -‘s for possessive, -s or -es for plural, but Turkish has dozens of suffixes.You can make whole sentences in Turkish out of one little word root and a lot of suffixes.

Suffixes are formed according to Turkish vowel harmony, rules whereby most vowel sounds in a word are made either in the front of the mouth or the back, but not both. More…

Suffixes are sometimes preceded by a ‘buffer letter’ such as ‘y’ or ‘n’ for smooth pronunciation.

Stress is usually on the last syllable of a word.

Halı almak istiyorum, I want to buy (take) a carpet (literally ‘Carpet to buy want I’)

Now you can slap a lot of suffixes together and get Afyonkarahisarlılaştıramadıklarımızdan mısınız? It’s actually a word, and also a complete sentence! But, it must be admitted, it was made up just to show off the agglutinative facility of Turkish.

What does it mean? “Are you from among that group of people whom we were unable to make to resemble the citizens of Afyonkarahisar?” 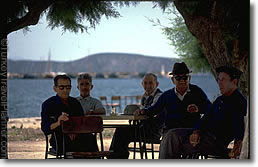 These guys sipping tea speak fluent Turkish. If they can do it, so can you! 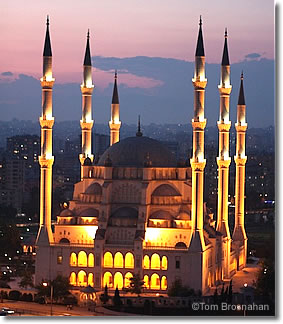 What’s going on here? Find out!