There is only one train between Turkey and Europe, the Istanbul-Sofya Ekspresi (Istanbul-Sofia Express), departing Istanbul (Halkalı) each night for Sofia, Bulgaria, with a connection at Dimitrovgrad for Bucharest (Bükreş), Romania. More…

Trains from Istanbul to Europe traditionally departed from Sirkeci Station (map; officially Istanbul Gar [“Istanbul Station”]) but everyone calls it Sirkeci Station to distinguish it from Haydarpaşa Station on the Asian shore of the Bosphorus).

Halkalı, the terminus of the former suburban banliyö treni line, is where the Marmaray line will, in future, connect to the European rail system, completing the first standard-gauge rail link between Europe and Asia…but we don’t know when.

Fares for travel from Istanbul to European cities are relatively expensive, but train travel in the Balkans is certainly an adventure. More…

Better to take a cheap flight or an international bus.

Sirkeci Station, by the way, was Istanbul’s first train station, and served as the terminus of the famed Orient Express from Paris to Constantinople. It is now a station on the Marmaray suburban rail line. 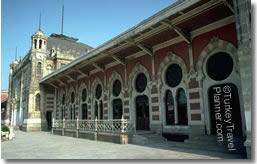