Turkey’s beautiful mosques (cami, JAH-mee) are open to all, Muslim and non-Muslim, Turk and foreigner, young and old.

The great imperial mosques of Istanbul, Bursa and Edirne are usually open continuously every day for long hours, for free (although donations for mosque upkeep are gratefully accepted).

In the most-visited mosques a separate area may be set off by railings for non-Muslim visitors so that distraction of worshippers is minimized.

Smaller mosques in other cities may close outside of prayer times. Often a caretaker is on hand (or can be notified) to let you in if the door is locked.

Unless you are a Muslim coming to pray, avoid visiting a mosque at prayer-time, that is, at or within a half hour after the ezan (call to prayer) is chanted from the minarets. The times, pegged to sunrise and sunset, change daily as the days grow longer or shorter. More…

Avoid visiting on Friday late morning through early afternoon, which is when the weekly group prayers and sermons take place. In short, if the mosque is busy with worshippers, it’s polite to return later to visit.

All visitors to mosques—Muslim and non-Muslim—remove their shoes before stepping onto the mosque’s carpets. This is a practical, not a religious, requirement: Muslim worshippers kneel and touch their foreheads to the carpets as they pray, so they’d like to keep the carpets clean.

Speak quietly, move slowly, and if you take photos, turn off the flash on your camera. (Look for the button with the little lightning bolt on it.) It’s most polite to ask permission before taking photos of people. It is notpolite to take photos of people at prayer.

Avoid walking in front of worshippers performing their ritual prayers, as this is considered impolite. Walk around or behind them. (Worshippers who miss the designated prayer time may come to complete their prayers later, and so may be in the mosque when you visit.)

When visiting a mosque, wear modest, conservative clothing which exposes a minimum of flesh. No shorts or sleeveless shirts on either men or women. At the most popular mosques in Istanbul (such as the Blue Mosque), attendants may provide robes to wear during your visit if your normal sightseeing clothing is too informal. (No charge for use of the robe.) 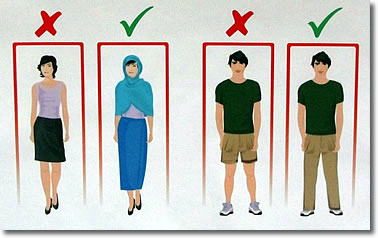 Women should wear slacks or a dress or blouse and skirt (at least below the knees), preferably with elbow-length or longer sleeves (no bare shoulders or upper arms), and a headscarf.

A handy garment for women is a light-weight, long-sleeved jacket-shirt or jacket with a built-in hood(“hoodie”). Wearing slacks, just raise the hood when you enter the mosque, and you don’t need a headscarf!

Men should wear long trousers and a sleeved shirt.

Footwear is not important as you’ll be removing it before entering the mosque in any case. 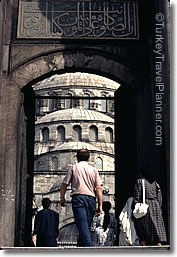 Turkey’s beautiful mosques are open to all.