I was in Istanbul in 1975 on a Fulbright fellowship studying dusty Ottoman legal documents which sounds perverse but was actually fun (well, sort of) though almost entirely pointless, of course.

My parents arrived in May from Rome where they had been visiting my brother Steve who was studying architecture there.

I insisted that we all deliver it to Aladdin together. For this mission I carefully selected a taxi driver from among the noisy pack at the end of my street.

His name was Hayri. He was in his late fifties, of medium height, clean-shaven, grey-haired and distinguished-looking. He always wore a tweed jacket, dark brown slacks and a matching sporting cap which perfectly matched his car, an antique Austin. At the wheel, he looked the perfect English gentleman.

As we approached, Hayri got out of the driver’s seat, doffed his sporting cap, opened the rear door for my parents and bowed slightly as they climbed in. In one smooth, flowing, graceful motion he closed the door, replaced his cap, glided into the driver’s seat, and we were off.

We coasted down the hill to Dolmabahçe and Hayri eased into the insane traffic along the shore road like a matador finessing a huge herd of bulls. Madcap drivers swirled around us, imperilling the Austin’s front and rear, threatening its brightly buffed flanks, but Hayri drove on smooth as silk and steady as a rock.

To be imperturbable in the madness of Istanbul traffic is a wonderful thing. I complimented him on his driving.

“Great drivers are born, not made,” quoth Hayri.

We drew up in front of Aladdin’s. Hayri bowed and handed us out of the Austin, accepted his fare and a considerable tip, and glided back into the traffic maelstrom humming a British ditty.

Aladdin had emerged to see who these important visitors might be who came by taxi. I introduced my parents and we all squeezed into his tiny cluttered shop. As usual, his boy magically appeared and was instructed to run and find more stools and to bring tea.

Aladdin unwrapped the parcel I handed him.

I held the raincoat up for him. He put it on and modeled it for us, turning this way and that, looking not into a mirror, for there was none, but into our faces for the reflection of our approval. We beamed and smiled and made low mutterings of approval. He walked outside and looked at his reflection in the dingy glass of the shop window. He beamed with delight and satisfaction.

He came back inside, thanked us again profusely, took off the coat, folded it carefully and set it aside.

Our tea had come. We sorted out the glasses, handed them around, and the conversation paused for an important moment: the commencement of the informal Turkish tea ceremony.

Tink tink tink tinka tinka tinklinklinkle, the tiny stainless steel spoons rang against the little tulip-shaped glasses as we stirred in sugar, holding the spoon-end between thumb and index finger, pinkie aloft. Gingerly I held the gold rim of the glass so as not to burn my fingers. Dainty sotto voce slurps, mixing cool air with hot tea as it enters the mouth.

Our minds had drifted off into the right-brain realm of sensations and dreamy feelings. Aladdin coaxed them back into the left-brain territory of purchase and sale.

“Rockefeller came?” I asked, confused. “Who? What Rockefeller?”

“Rockefeller!” he said and handed me a newspaper clipping.

It was a photo of Aladdin in front of his shop next to the huge ibrik. On the other side of the ibrik, shaking Aladdin’s hand, was Nelson Rockefeller. The caption read “Former governor of New York and Vice-President of the USA Nelson Rockefeller visits Istanbul craftsman.”

“He bought the ibrik,” Aladdin said.

He smiled so broadly I was sure his face would crack. Nelson Rockefeller! I would sooner have expected Elvis.

As they sipped their tea, my parents surveyed the shop and picked out a few souvenirs. Aladdin packed up their choices and wouldn’t let them pay.

We finished our tea, said our goodbyes and left. As we walked away, we looked back to see Aladdin sauntering down Çadırcılar Caddesi on this bright sunny day in his new American raincoat with a rolling walk, chin up, looking to left and right, waiting for the inevitable questions and comments from other shopkeepers on his unusual and newly-acquired sartorial splendor. Who on earth would buy it?
Nelson Rockefeller, of course. 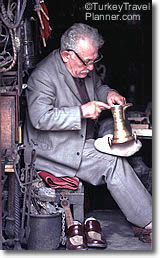