We all use the toilet (tuvalet) several times daily, and for your trip to Turkey it’s important to know about them:

Toilets are marked with “WC,” Tuvalet, or “00” and the words Bay (Mr, male) or Bayan (Ms, female), or with pictograms, or with gender-marker items such as a tobacco pipe for men and a fan for women. (Turkish Language Guide)

Most of the toilets you’ll encounter in Turkey are of the standard Western raised-commode type, and the newer models (like the one in the photo to the right) have two-flush mechanisms which make a small flush for liquids and a large flush for solids in order to conserve water.

The sign above the flusher panel in the top photo to the right says “Please help us save water! Push flush button twice,” which is counter-intuitive to say the least. What it means is that the first push starts the flush, and the second push stops it, saving water.

You may also see the older, flat “elephant’s feet” type of toilet on which you squat rather than sit.

To squat on a flat toilet may seem scary to someone used to the raised commode, but it’s actually quite hygienic once you get used to it (if ever), because only your feet touch the toilet. It also puts you in what doctors might call an “anatomically correct position” for the swift and efficient completion of the business at hand.

Just don’t let all the stuff fall out of your pockets into the flat toilet while you’re squatting! 😉

Although you’ll see more of these flat alaturka toilets in public toilets and in the less developed regions of the country, both styles of toilet are used by the local population, so even new buildings will have flat toilets installed along with the commodes. If you see only flat ones, look around for a stall with a raised commode. There’s probably one close by.

Both types of toilet have a spigot and/or a container of water for washing the left hand after use, because the bare left hand, not toilet paper, is traditionally used to splash water on the bum to cleanse it. In the second photo to the right, note the small pipe and valve to the left of the commode. These provide water to the small white nozzle at the back of the bowl for washing the left hand after it has been used for splashing and wiping.

Many toilet stalls may be furnished with toilet paper, but it’s traditionally used not to wipe but to dry your bottom and your hand after the splashing.

(In April 2015, Turkey’s supreme Islamic religious body, the government Diyanet, issued a fetva [religious legal determination] that use of toilet paper for cleaning was permitted, but washing with water was still the preferred method. Nothing was said about the reason for using paper: that it shields the hand from fecal matter which may spread disease.)

Hands are washed with soap after toilet use—one hopes.

Those who use paper for wiping may want to dispose of the first paper in the toilet, and any later papers in the bin—a usually-workable compromise.

Public toilets usually charge a small fee (about TL1.00) for use. A few may differentiate between büyük abdest(bowel movement) and küçük abdest (urination) and charge more for the former than for the latter, but nowadays it’s mostly a flat fee for whatever you might need to do. 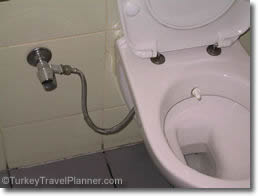 Valve and nozzle for bum-washing.