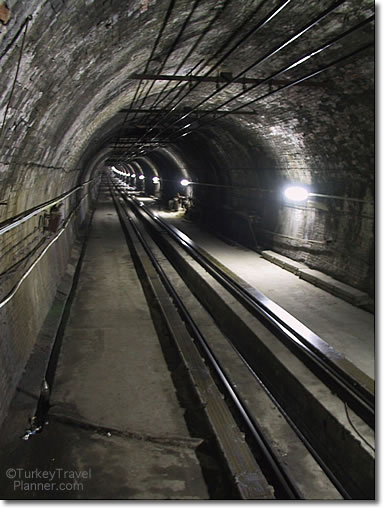 Built by French engineers, Istanbul‘s Tünel was among the world’s earliest underground trains.

Elegant cars of lacquered mahogany were divided into men’s and women’s sections, as Islamic custom required.

Enamel signs read “It is Requested that Cigarettes Not be Smoked in the Cars.”

Upon the Tünel‘s completion in 1875, the Ottoman Empire‘s Sheik-ul-Islam (supreme Islamic judge) declared that it was unseemly and unnatural for God’s creatures, human or animal, to travel underground, and therefore riding the Tünel was haram (forbidden).

That lasted about a week, after which Beyoğlu‘s corpulent businessmen decided not to hike up the hill from their Galata offices when there was a comfortable, speedy, economical alternative.

Renovated in the 1980s, the cars are now of steel, the signs read “No Smoking,” and one space does for all genders, but it’s still the fastest, most comfortable way to travel between Tünel Square, Galata (Karaköy) and the northern end of Galata Bridge.

You can even use your IstanbulKart to pay the fare!

I wonder what the Sheik-ul-Islam would say about that….