The New Mosque (Yeni Cami), in Istanbul‘s Eminönüdistrict on the Golden Horn at the southern end of Galata Bridge, is officially the Mosque of the Valide Sultan(Queen Mother) because it was commissioned by Safiye, mother of Sultan Mehmet III in 1597.

After her son died, Safiye was no longer Queen Mother, with a queen’s powers and revenues, so her mosque sat unfinished.

Six sultans later, Turhan Hatice, Queen Mother of Sultan Mehmet IV, took up the work and finished it, which is another reason it’s called the Valide Sultan’s Mosque.

I guess it is “new” because it was finished after Istanbul‘s other great imperial mosques: the Fatih Camii (Mosque of the Conqueror, 1470), Selimiye Camii (1522), Süleymaniye Camii (Mosque of Sultan Süleyman the Magnificent, 1557), and the Sultan Ahmet Camii (Blue Mosque, 1616).

Inside is a wealth of gold, marble and faience (colored tiles). Be sure to take a look when you’re in Istanbul. More… 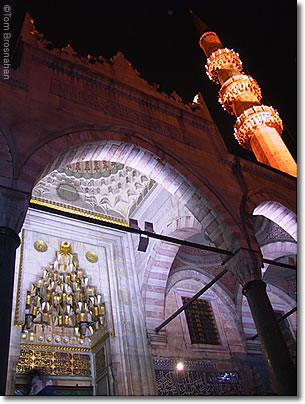