If you want to visit a place where you can really get a feel for what life was like 2000 years ago during the glory-days of Greece and Rome, Ephesus (also spelled Efes, Ephesos or Ephessos) is the place. In terms of ruins, it’s better than Rome itself.

Guided Tours are available from Istanbul, İzmir, Kuşadası and other towns. You can even fly from Istanbul to İzmir‘s Adnan Menderes Airport, tour the archeological site, and return to Istanbul the same day. Ask any of my recommended travel agencies to make the arrangements for you.

If you visit in summer, it’s best to visit Ephesus first thing in the morning, before the sun gets too hot and before the press of group tour buses gets too heavy. You can see the impressive ruins in 2 to 3 hours if necessary, though half a day or more is better.

If your hotel is in Selçuk, or if you come from Şirince by minibus, you can walk the pleasant 3 km (2 miles) to the ruins in the cool of morning along tree-shaded Dr Sabri Yayla Boulevard in 30 to 40 minutes (map). This will take you to the main parking lot and northern entrance. Otherwise, minibuses run past the access road frequently for a fare of TL2.50 from Selçuk.

On the walk you’ll pass the Artemision, the Temple of Artemis, one of the Seven Wonders of the World. More…

If you ride to the ruins, many people prefer to start at the southern (upper) entrance by the Magnesia Gate so they can walk downhill, so ask the driver to leave you there. This entrance is on the road to the House of the Virgin Mary (Meryemana).

Admission to Ephesus costs TL30, plus another TL15 if you want to see the mosaics in the Terrace Houses. Besides paying at the entrance, you can buy tickets in advance online with a credit card, print them, and validate them upon entering. More…

Signage at Ephesus is simply terrible (compare the far better signage at Aphrodisias), which no doubt promotes the sale of guidebooks, audio tours and the services of human guides, all of which are available at both entrances. Quality of human guides vary by the guide, but most are entertaining and informative. The books are mostly pretty expensive for what you get. Some are not very informative.

For the audio tours, which are pretty good, you pay TL20 for a paper map and the rental of the audio device, plus a TL100 refundable deposit. If you like, you can rent the audio device at once entrance and arrange to return it—and to retrieve your driver’s license—at the other entrance.

Ephesus was a prosperous, rich Roman city with a busy port and a brisk pilgrimage trade to the Temple of Artemis. Here are the important things you’ll see:

Built into the slope of Panayır Dağı, this is the Roman reconstruction (41-117 AD) of the earlier theater built by Lysimachus. Though huge, with 25,000 seats, its ingenious engineering gives it excellent acoustics. It’s still used for performances and special events.

The avenue leading from the theater to the harbor was a grand affair, with colonnades, fountains, monuments and even street lights along it, and water and drainage conduits beneath its marble paving stones.

This aptly-named street leads south from in front of the theater to the Brothel and Library of Celsus. West of it are the remains of the spacious Commercial Agora.

A lavish building, now in ruins, it stands across from the library, a reminder that prostitution was not looked upon as degrading in some ancient societies. Just outside it, seek the Men’s Toilets—immediately recongizable!

A technological wonder, with double walls to keep out the damp and moderate the extremes of temperature, it is also perhaps the most beautiful building at Ephesus, finely restored. To the right is the Gate of Augustus, a monumental arch leading to the Commercial Agora.

This splendid hillside street, starting in front of the Library of Celsus, is longer and even more interesting than the Arcadian Way. Along it you’ll find…

The wealthy of Ephesus resided in these beautiful villas with mosaic floors and classic decoration. After years of painstaking and expensive restoration, they are open to visitors, and are well worth the extra TL15 admission fee you must pay to see them.

The head of Medusa is the most famous bit of decoration on this fine temple built in 118 AD to honor Emperor Hadrian (and extensively rebuilt several centuries later). Facing the temple across Curetes Way are ten shops. Note the fine mosaic in front of them.

The two-storey structure half-way along the street dates from the 300s AD. A side street leads south to the Museum of Inscriptions.

Ephesus’s city council met in this fine small theater-like council space. Opposite the Odeon are other badly-ruined structures, including the Prytaneum (city hall) and Temple of Hestia Boulaea. On the other side of some badly-ruined baths is the Magnesia (upper, southern) Gate into the Ephesus Archeological Site.

On the far (eastern) side of Panayır Dağı, the hill holding the Great Theater, are the caves called the Grotto of the Seven Sleepers. You can walk or drive to the grotto, which is actually a Byzantine necropolis (cemetery).

Near the summit of Bülbüldağı (“Nightingale Mountain,” the ancient Mt Koressos) to the south of Ephesus is the House of the Virgin Mary (Meryemana). More… Above, the Great Theater seats 25,000.
Below, Library of Celsus & Augustus Gate.
Bottom, the Temple of Hadrian. 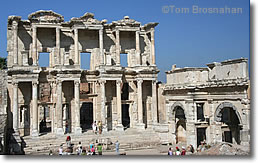