İzmir is the third-largest city in Turkey with a population of approximately 4 million people.  İzmir is formerly known as ancient Smyrna, the pearl of the Aegean.  It is a major port, set between the Aegean Sea and a backdrop of mountains the city has a history of being home to many ancient civilizations, including the Ancient Greeks, Persians, Assyrians, Romans, among many others.  Much of the city was burned during the War of Independence (1922).

Most travelers travel from İzmir to neighboring Ephesus (Efes) or to the Aegean coastal towns of Alaçatı and Çeşme.  However, İzmir has great access to many neighboring villages such as Urla, Foça, and Kuşadası.  If using İzmir as a regional base, you could also easily access Bergama/ Pergamum, Sardis, Aphrodisias & Pamukkale.

Within the city, İzmir boasts a number of sites with the most notable being the Kemeraltı Bazaar, the İzmir Clock Tower (Saat Kulesi), and the Agora Open Air Museum. Visitors who have more time to explore could also enjoy the panoramic views of Asansör, take a stroll at İzmir Kordon, or explore inside Izmir’s museums or shopping malls. Nature lovers would enjoy taking a cable car (teleferik) and going for a hike in Balçova or having a picnic or BBQ at İnciralti Park. Transportation in İzmir is easy thank to its well-connected system of trams, metro, buses, and train (İzban). Visitors can also fly from Adnan Menderes International Airport with domestic flights to 20 cities and international routes to 35 countries. Refer to the regional transportation map for more information. 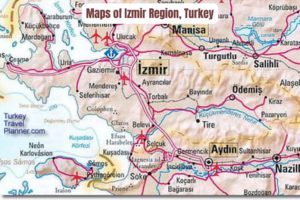