It’s famous for its Turkish carpets and for attar of roses, which is made here.

Süleyman Demirel (born 1924), prime minister of Turkey seven times between 1965 and 1993, and 9th president of Turkey (1993-2000), was an Isparta native, and Süleyman Demirel Universityhere is named in his honor.

Isparta is mostly modern architecture, but it does have a few interesting old buildings, especially its mosques.

On your way from west to east or north to south, you may want to use Isparta for a rest or overnight stop, although nearby Eğirdir is a prettier alternative. 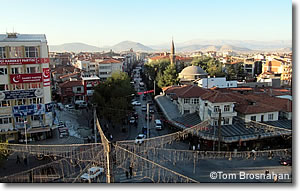 The center of Isparta, Turkey.