Istanbul’s Beyoğlu district to the north of the Golden Horn has plenty of variety. Here are the major restaurant areas:

On İstiklal Caddesi a block southwest of Taksim Square, Hacı Baba is a longtime favorite with glassed-in terrace tables overlooking the pleasant courtyard of the Greek Orthodox Church next door. More…

With two locations on and off İstiklal Caddesi, Hala is the place to go for traditional Turkish ravioli (mantı) and gözleme. Most of the patrons here are locals, not tourists. More…

Halfway along İstiklal Caddesi from Taksim Square toward Tünel Square is Galatasaray Square, and near it are several major groupings of cafés, bars and restaurants:

Off İstiklal Caddesi at Galatasaray Square, this long narrow courtyard is lined with restaurants offering good food at rather high prices in a convivial atmosphere. More…

Near the Çiçek Pasajı, this street is chock full of meyhanes (Turkish tavernas) serving excellent food and copious booze at outdoor tables in a bright, active, noisy atmosphere. More…

At the southern end of İstiklal Caddesi, the area around Tünel Square probably has more cafés, bars and restaurants than all the rest of Beyoğlu.

Here’s the rundown on breakfast places. For later in the day and night, try:

Every other doorway along this narrow street between İstiklal Caddesi and the Pera Palace Hotel leads into a restaurant.

Two of my favorites here are Asmalı Cavit at No. 16-D, and Yakup-2 right across the street from it at No. 21. Both are meyhanes, or taverna-restaurants, where alcoholic beverages (beer, wine, rakı) are looked upon as an integral part of the meal.

Lined with small cafés, bars and restos, this is one of the first places to cruise.

At the southern end of Sofyalı Sokak, the Tünel Pasajı is the courtyard of a 19th-century building right across the street from the entrance to the Tünel subway station. It’s jammed with café-bar-restaurants, some with outdoor tables. More…

A wonderful Art Nouveau monument is again open and serving after having been closed for decades. Step back in time to the turn of the century. Unfortunately there are no more profiteroles—they serve fast-food burgers and fries now. More… Above, near Taksim Square, the terrace at Hacı Baba.

Below, the Çiçek Pasajı on İstiklal Caddesiat Galatasaray Square has dozens of restaurants. 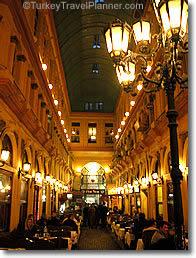