Thirsty Turks sip 60 million liters of rakı each year, mostly with meals. (Where a European or North American will sip wine with a meal, most Turks will sip rakı.)

Rakı (rah-KUH) is clear brandy made from grapes and raisins, flavored with pungent anise. Most is quite potent (80- to 100-proof/40% to 50% alcohol) and thus usually diluted with water and sipped with snacks or meals.

When mixed with ice and/or water for drinking, it turns milky white. Because of its color and hefty alcoholic punch, Turks call it lion’s milk (aslan sütü).

If you like licorice and anise, you may like rakı. If you don’t, for sure you won’t.

Some rakı factories are located near İzmir to take advantage of its abundant, high-quality grapes, raisins, anise and sakız(mastic, pine gum), which is added to some brands.

Until a few years ago, Turkish rakı was made exclusively by Tekel, the former Turkish government tobacco and spirits monopoly which produced the Yeni Rakı, Kulüp Rakı, Tekirdağ and Altınbaş brands.

In 2004 the monopoly ended with the opening of the commercial Elda company distillery, producing the premium Efe Rakı brand. This started the trend to more brands.

The major rakı-producing companies now include Burgaz, Tarış and Mey as well as Elda. The former Tekel brands of Yeni Rakı, Kulüp Rakı, Tekirdağ and Altınbaş are now produced by Mey. 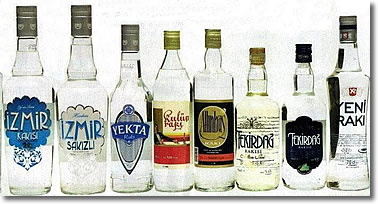 The new rakı companies have elaborated the traditional drink so that the various brands have slightly different flavors and alcoholic strengths. For example, Elda’s Sarı Zeybek is a premium “yellow” rakı made with choice Tefenni anise and aged for six months in French oak barrels to give it a smooth taste and pale yellow color. It’s pretty expensive at TL35 for a 70 cl bottle versus TL25 for Yeni Rakı or TL20.50 for Mey’s Yekta brand.

It must be mentioned that several people died and others were sickened in 2005 from drinking sahte rakı (fake, or bootleg, rakı) made by parties unknown of substances mysterious.

The illegal manufacture and sale of liquor in Turkey is partly because of the high taxes (especially the “Special Consumption Tax” or ÖTV) on alcoholic beverages: the tax on a bottle of rakı in a shop constitutes more than 50% of the price. More…

With taxes so high, the temptation for bootleggers to enter the market, sell inferior—or even dangerous—rotgut liquor, and pocket profits of 75%, is extreme.

It’s a good idea to stick to the major brands and to confirm that the seals on the bottles are intact before you are served. There should be few problems in legitimate restaurants and bars.

Here’s how to drink Turkish rakı. Several brands of rakı from the Elda company, from the premium Sarı Zeybek (TL35) to inexpensive Çilingir (TL21).

Rakı Cocktail at Seraser Restaurant, Antalya, Turkey. Note the crushed ice in the outer glass to keep the drink cold.