Binbirdirek (“1001 columns”) Cistern, just west of the Hippodrome in Sultanahmet (map), is the second largest underground cistern in Istanbul (after the Basilica Cistern).

Enter either by the grand doorway on Imran Öktem Caddesi near the Adliye Sarayı (Law Courts) or through the ugly modern building in the little park atop the cistern (between Işık Sokak and Klodfarer Caddesi). There is a small admission charge.

With 212 columns (of an original 224), and an area of 3610 square meters (nearly an acre), Binbirdirek is certainly impressive. It is also very old, perhaps dating from the days of Constantine the Great, who founded New Rome (Constantinople) in 330 AD.

When I first saw it (1968), it was mostly dry, filled with earth, and lit by a few naked lightbulbs. The earth has been removed—hundreds of truckloads of it—and replaced with concrete. The plan was to turn it into a shopping mall. Few people wanted to shop underground, however, so now it is mostly empty except for a blue-lit bar where you can sip a tea or coffee (included in the price of admission), or something stronger (not included).

Ugly plastic tarps deflect the water that drips from the ceiling of the cistern. When it was a cistern, the dripping water would’ve been an asset, not a liability.

Although Binbirdirek and the Basilica Cistern are the two largest cisterns in Istanbul, in fact many important Byzantine public buildings had cisterns beneath them. It is not at all unusual for construction workers to encounter an unknown cistern. Usually there is no money to restore it, so it’s closed and preserved for a time when funding may be available. Below, the very blue bar. 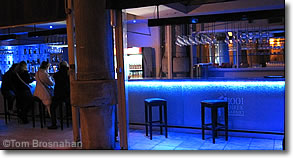