Airfare consolidators are companies that may save you money on your flight to Turkey.

Consolidators take a gamble by buying blocks of airline seats from the airlines on various flights at a steep discount, then reselling them to the public at less of a discount in order to make a profit. If they don’t sell them, they may take a loss.

For example, a major airline may sell a consolidator 50 seats from New York to Istanbul for US$700 each. The consolidator may try to sell them for US$900 each. If there are not enough buyers, they may lower the price to US$800 each. And if there are still no buyers, to US$750 or even US$600.

On the other hand, if demand for the flight picks up, the consolidator may be able to sell the seats for US$1000, making a profit of US$300 per seat.

It’s a game of risk for the consolidator. What it means for you, the traveler, is that sometimes consolidator fares may save you money—perhaps even a lot of money.

You may have to commit to buying a ticket before you even know which airline you’ll be flying on.That’s normal in the consolidator fare business.

But you can often figure out which airline you’ll be flying by comparing flight dates and times. 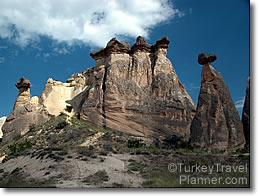