Here’s an excerpt from my humorous travel memoir, Bright Sun, Strong Tea. (The previous episode is Tears at Topkapi.)

It was early in the morning on September 27th [1982], the first day of Kurban Bayrami, the Sacrifice Holiday.

We left the Kars–Erzurum highway [map], and the road soon deteriorated to stabilized gravel, then to dirt. It was slow going, and the scenery was bleak: dusty treeless hills with no sign of civilization.

A yellow-and-black sign pointed off the road into the hills: Kaya resimleri, it read. Rock pictures.

What rock pictures? There was nothing about rock pictures in the guidebooks I had read for reference. It was my job to find out if these rock pictures were worth seeing so I could include them in my new Lonely Planet guide.

We turned right and followed the sign along a rough, badly rutted side road and uphill to a small, poor village called Çamuslu Köyü. We reached the first houses of the village but saw no signs pointing the way to any rock pictures.

We stopped. A man emerged from a house and approached us.

“Selamün aleykum!” (Peace be with you), he said. “Hos geldiniz, safa geldiniz!” (Welcome, and well come).

“Hos bulduk!” (We feel welcome) I answered. ‘We’re looking for the rock pictures.”

“Yes, of course, they’re up above the village on the cliff. We’ll show them to you, but first come have some tea.”

The man was Zeynel Demirci, the muhtar(village headman). We got out of the car and followed him into his house where his wife and daughters awaited us. He showed us to the seat of honor on the sedir in the salon, brought the traditional welcoming cologne, cigarettes and sweets, and asked us about our travels.

“Have you had breakfast yet?” he asked.

We had had a snack as we set out from Dogubeyazit, but not a proper breakfast. We were hungry, but we didn’t want to inconvenience him or his family, so we said yes, we had had breakfast.

“But are you hungry now?” he insisted. “It’s bayram, we’ve prepared the feast, and God has sent you to dine with us. Come, come! Please join us.”

Well, actually, we would. It was getting along toward noon, and there wouldn’t be any other place along this road to get food.

We gave in. The wife served us roast mutton and freshly-baked village bread. It was delicious.

Word had obviously gone out on the invisible but extraordinarily effective and speedy village word-of-mouth folk telegraph that something was up, and it had to do with oddball beings arriving in a white car with Ankara license plates. We knew this because with every forkful of mutton a new villager arrived in Zeynel Bey’s house to gawk at us. Pretty soon the house was packed, and the porch and the yard out front as well, but everyone was exceedingly polite and courteous. We were a pair of fairly scruffy American gavur (infidel) vagabonds, probably the first and only non-Muslims, let alone Americans, that anyone in Çamuslu Köyü had ever seen, and we were being treated like royalty.

Have you ever dined with 100 eyes watching your every move? I mean, you’re not being watched by other people at the dinner table. The other people are not eating, they’re just watching you, as though you were Madonna having sex, or Lady Di doing nothing. Like you’re on a stage, at a dinner table, and there’s an auditorium full of curious, eager people with laser-like gazes aimed at your fork as you stab a glob of mutton, raise it to face level, part your lips, welcome the glob into your oral cavity, molarize it for a few seconds, then send it south. God forbid you should fight with a piece of gristle, or have a gob of saliva go down your trachea and cause a coughing fit (which was highly likely, as the mutton was delicious, literally mouth-watering). Think what that’d do to your ratings! Lemme tell you, it’s not easy to eat like a king. Next time you see a celebrity in the midst of oral gratification, think this over.

We cleaned our plates and were almost surprised, but in fact relieved, when the expected round of applause (hoots, whistles, The Wave) didn’t materialize. “Nefis!” (Delicious!) I said, which comment was greeted by wide smiles and an appreciative murmur by the throng assembled.

Concerned about the long and perhaps rough road ahead of us, we mentioned the rock pictures again. Zeynel Bey led us outside and back to our little white underpowered Renault 12. He, the village teacher and another man of some mysterious significance piled into the narrow, thinly padded back seat of our little car which had been designed only for spindly French endomorphs. The small engine hauled us uphill, wheezing the Marseillaise, over the rutted road to a sheer rock cliff.

“Last summer an archeological research team came here from Ankara University” the teacher said. “They made photographs and drawings of the rock pictures, and dug some trenches.”

“We did the digging,” said Zeynel. “It was pretty interesting, and our men could use the work. Our village isn’t rich. We learned something about where we live.”

It still amazes me that something as important as prehistoric rock carvings could go unnoticed for centuries, but so it is everywhere. The great Mayan cities of Central America just sat there in the jungle until New York lawyer and amateur archeologist John Lloyd Stephenscame along and asked about them. “Oh, sure,” the local villagers said, “there’re lots of old stone buildings in the jungle. Our ancestors built them. Want us to show you?”

Here in Çamuslu Köyü, the rock carvings could be more significant than those at Lascaux in France for all anyone knew, but until the highway department put up the sign, and the team came from the university, and the guidebook author stumbled in by accident, they’d just sit there, unknown to everyone but the villagers. Media coverage is everything, at least if you’re an antiquity.

We returned to the village, and the muhtar insisted that we come in for a parting glass of tea. Jane had some free cosmetic samplesthat she had received in the mail and brought along as travel equipment–things like rouge and eyeliner and eye shadow, things you could find easily in New York–or in Ankara, for that matter–but were scarce as moon rocks in Çamuslu. She gave them to the eldest daughter, a hard-working farm girl with bright eyes and rough hands.

The girl had no idea what to do with them. It was the equivalent of the girl giving Jane a tractor coupling.

The girl smiled shyly as Jane gave her the short course in becoming Miss Maybelline. When Çamuslu Köyü gets its first disco in 2050, she’ll be ready, except by then she’ll be 83 years old and no amount of makeup will, uh, make up for it.

In Turkey if you give someone a gift, she or he takes it as a challenge and will not rest until she/he has given you something of greater value. The girl’s mother loaded us down with the wealth of the village: apples from the village trees, freshly-gathered walnuts, and handmade dried cheese that looked just like rough twine–but soak it in water and it plumps up to tasty string cheese. Food for the road. It was just what we needed.

“Please write to us,” Zeynel said. He jotted down his name and address on a scrap of paper.

We were about to part, but I felt that Zeynel had something on his mind. He was too polite–the courtliness of the Turkish villager–to bring it up during our visit, but now the visit was over and we were leaving. It was now or never. He threw politeness to the wind and asked a favor.

“You saw the condition of our village road. It’s awful. Sometimes in winter we can’t even get up to the village. We complain to the highway department but they don’t listen to us. They say they’ve got more important roads to build. You’re a tourism writer, an important man.If you write to us and say it’s important to improve our road so that tourists can get to the rock pictures, we can use it as evidence. We may be able to convince them to improve the road. Could you do that?”

I found it hilarious that he thought me important. I warned him not to expect much.

I didn’t have the heart to argue. We said goodbye and drove off.

It took until January for me to write the letter to Zeynel Demirci, but when I wrote it I made the petroglyphs of Çamuslu Köyü sound more important than the Elgin Marbles. I sent off my letter to him and promptly forgot about the whole matter.

Four months later, in April, 1983, much to my surprise, I received a reply:

Wow! Zeynel Bey was right after all: the words of a foreign travel writer really did have some clout in eastern Turkey.

[Next: “Some People Never Learn“] 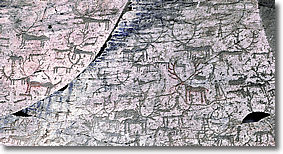 Jane and the extended Demirel family An excerpt from Zeynel Demirel’s letter.