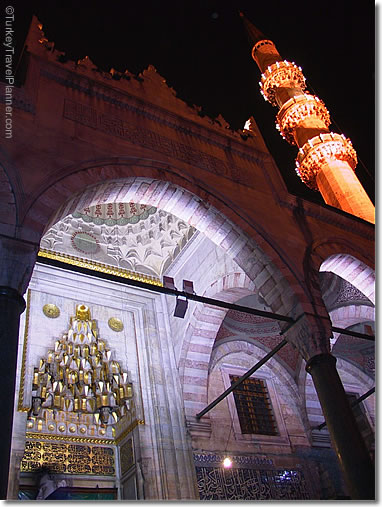 Construction on Istanbul‘s Yeni Valide Camii (New Queen Mother Mosque) in Eminönü was begun in 1597 and finished in 1663. That makes it new….?

Well, it was new at the time. And it became the “New Mosque” when people dropped the “Valide” from its name in common usage.

I’m not sure it looked this good even when it was new. It’s been renovated from time to time over the years: the marble cleaned, the inscriptions and trim re-gilded, the lighting improved. But it looks quite new now.

Millions of tourists visit Istanbul every year. Most walk through the fabulous Blue Mosque and perhaps the huge Süleymaniye, but few give more than a glance to the other imperial mosques such as the Yeni Cami, the Beyazıt, and the Fatih.

Do yourself a favor! Get off the beaten path. You may find sights like this.