At the very center of this ancient city is its Hisar (fortress or citadel, kale), built by the Byzantine Emperor Justinian during the 500s. It’s the largest part of what’s left of the city’s once-formindable defenses, which included extensive surrounding city walls.

The Hunat Hatun Mosque (1228-1237) in the center of Kayseri was built by Empress Mahperi Hunat (or Huant) Hatun, wife of the great Seljuk Turkish Sultan Alaettin Keykubat (1223-1237). The complex includes the great mosque (cami), the lady’s octagonal tomb (türbe) (inside the front door, to the left), a theological school (medrese) (to the left of the mosque, now a shopping center) and a hamam (to the right).

Kayseri’s Çifte Medrese is among Turkey’s most impressive buildings, not just for its architecture, but for its concept and function. Ecologically and technically advanced for its time, it housed a medical center with a surgical operating theater. Sound ducts conveyed music into patients’ sick rooms. A thick sod roofprovided insulation, a rain barrier, and a garden plot in which to grow many of the vegetables and herbs used for patients’ care. Built (1206) by Seljuk Sultan Giyaseddin Keyhüsrev I in memory of his sister Gevher Nesibe Hatun (whose tomb is here), it served the entire population of Kayseri—Muslim, Christian or Jewish, Greek or Turk—regardless of race, religion or ability to pay. It’s now set up as a Museum of Medical History.

Across the boulevard from the citadel and the Çifte Medrese, this theological school built in 1267, once badly ruined, has been repaired and modernized. Its portalresembles what it has been through the ages, but the rest of the building is now used as a book bazaar.

This Seljuk mosque and medrese date from 1249, just a few years later than the grand Hunat Hatun Mosque and Medrese nearby.

Kayseri’s Ulu Cami was started by the Danishmendid emirs of Kayseri in 1135, and finished by the Seljuks in 1205. It’s a mosque of the pre-Ottoman kind, a rectangular hypostyle hall (ie, filled with columns).

The Revolving Tomb, as it’s called, doesn’t revolve, but its cylindrical form makes it look as though it might. Built in 1276 as the final resting-place of Şah Cihan Hatun, an imperial princess, it’s covered in high-relief arabesque decoration depicting animals and plants. The nearby Sırçalı Kümbet is not quite as elaborate. The ÇifteKümbet (Double Tomb), 5 km along on the way to Sivas, is yet another of these characteristic Seljuk royal tombs.

The 18th-century stone Güpgüpoğlu Konağı has been beautifully restored to serve as Kayseri’s Ethnographic Museum. Besides the interesting exhibits, consider the layout of the house itself, with the traditional division between selamlık, the public half of the house where the men entertained guests, and the haremlik, the private family quarters. Near the museum is the Atatürk Evi,the house used by modern Turkey’s founder when he visited the city. It’s now a museum as well.

Kayseri’s citizens are renowned in Turkey for their commercial acumen. Two historic market buildings are well worth visiting, the Bedesten and the Vezir Hanı, both near the Ulu Cami (Great Mosque) in the city center.

On Kayseri’s outskirts are several grand Seljuk Turkish caravanserais, the Sultan Han and the Karatay Han, left from the days of the Silk Road. Below, the Hunat Hatun mosque. 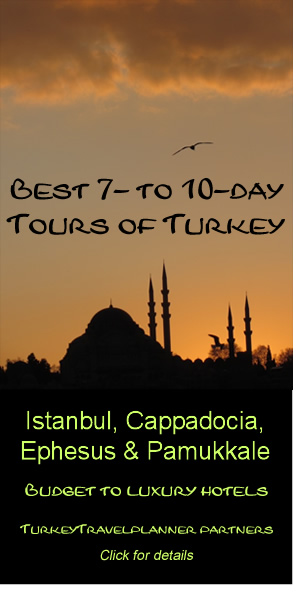