Taksim Gezi Park, just north of Taksim Square in Beyoğlu (map), is one of the very few open green spaces in this part of Istanbul.

Once a district of fields and vineyards, Beyoğlu was built up during the 1800s as the modern European-style part of Constantinople. A reservoir here was filled in to make Taksim Square, and in 1806 the huge Halil Pasha Artillery Barracks was built on its north side.

In March 1909 the barracks ws extensively damaged during a revolt against the Ottoman government. After the foundation of the Turkish Republic in 1923, the barracks was razed to make the first football stadium in Turkey. In 1940, the stadium was razed and the site became a public park—a sorely-needed amenity in a city that grew far too fast, with poor urban planning, in the latter decades of the 20th century.

In 2011 the municipality accepted plans to develop the park into a modern version of the barracks containing shops, luxury residences and, according to rumors, a mosque. In May 2013, removal of trees was to begin.

Taksim Gezi Park was not the only open area to be developed in this district.

To the west across Cumhuriyet Caddesi from Taksim Gezi Park was the Ottoman barracks’ parade ground, called the Talimhane. After World War II this large, flat, open area was developed with a grid of streets, and more recently has seen the construction of more than a dozen medium-size 4-star hotels, adding to facilities for tourism, but simultaneously depriving visitors of part of the beauty they had traveled to enjoy.

On May 28, 2013, a small group of people opposed to the removal of the park’s trees and development of one of Istanbul’s very few open green space, set up camp in the park to protest. On May 31, police attempted to clear the square with truncheons, tear gas and water cannons. Soon Taksim Square was crowded with tens of thousands of protesters.

Sympathy protests followed in other Turkish, and even foreign, cities.

Over the next week this minor event developed into a nationwide protest against not only the destruction of scarce urban green space, but also to some of the government’s policies and methods of enacting them.

I visited Taksim Gezi Park on October 28, 2013. The row of shops and offices along the east side of Cumhuriyet Caddesi just north of Taksim Square is gone (no loss), replaced by a dirt slope up to the park. The park’s trees are still there, and the park is crowded with strollers, smoochers, sunners, chatters, idlers, sippers of tea, and kids playing in the little playground.

The underground viaduct connecting Tarlabaşı Bulvarı and Cumhuriyet Caddesi, and other traffic changes, have removed almost all vehicular traffic from the Taksim area, which is a great benefit.

Ironically, this has created a much larger open area that could be the site of any future demonstrations. (Taksim Square has a history as a venue for large gatherings.) However, the government takes rigorous measures to prevent gatherings there, particularly on anniversaries of events that might draw crowds.

The park was the same when I returned to it in mid-November 2014.

The Economist published this opinion article on the events. Thomas Friedman of the New York Times had this to say.

The government has reportedly begun construction of a giant mosque on forested Çamlıca Hill, the highest hill on the Asian shore of the Bosphorus. The site is another of the few green spaces left in Istanbul, and one that has been enjoyed by Istanbullus for centuries because of its spectacular views. The governing party has stated that the monumental mosque is to be a symbol of the party’s years at the head of government.

When I first arrived in Istanbul in 1968, there was a park just northeast of the Pera Palace Hotel. It had been a cemetery during the 19th century, and was still called Le Petit Champs des Morts by older residents. It had trees, good views of the Golden Horn, and a small wooden theater used for summer performances.

Some years later it was developed into a convention center, a completely unsuccessful project because the site was too small and access too restricted. (Istanbul’s later, newer convention venues were better planned and sited.) The misconceived, ugly buildings were soon put to other uses, and what was once a park is now a dreadful eyesore used mostly for parking cars.

New Parks Developed in the 1980s

In contrast, from 1984 to 1989, Mr Bedreddin Dalanwas mayor of Istanbul. Besides greatly improving the fast-growing city’s infrastructure (roads, water, sewer, etc.) he razed polluting workshops along the Golden Horna nd developed the shores into parks which are now greatly enjoyed by Istanbullus in search of scarce green open space in the teeming city of 15 million souls. 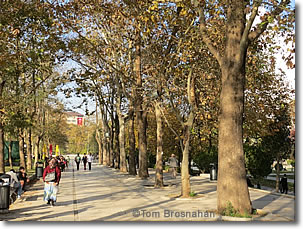 Above, the kids’ playground.

Below, the dolphin fountain. 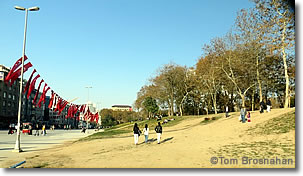