The mosaics in the museum, behind Istanbul‘s Blue Mosque (Sultanahmet Camii) on Torun Sokak, just off the Arasta Çarşısı (Arasta Bazaar; map), are lively, artful images of 90 different hunting scenes, mythical beasts, fantastic objects and imaginings, with 150 characters over a mosaic area of 250 square meters, perhaps the largest single installation of mosaics to survive from Late Antiquity (450-550 CE).

The museum is usually open daily (closed Monday) from 09:00 am to 18:00 (6pm) in summer, 17:00 (5pm) in winter, but in late 2015 it was announced that the museum will be closed for up to two years for restoration of the mosaics and renovation of the museum building. Check to be sure it will be open for your visit.

Unearthed during excavations from 1932 to 1935, the mosaics are the remains of a large courtyard that once adjoined the Palace Aula, one of the many courtyards, audience chambers and throne rooms, gardens, churches and chapels, baths and fountains of the vast, rambling Great Palace complex ordered built by Constantine the Great (306-337), founder of Constantinople.

The palace complex covered much of the area on the east side of the Hippodrome (At Meydanı) and extended downhill to the city walls on the Sea of Marmara.

Much of the palace complex was destroyed in the disastrous Nika riots of 532. It was rebuilt on order of Emperor Justinian (527-565). The mosaics you see in the museum are from this time, the 6th century.

They’re not as fine, colorful and glorious as the ones in Ayasofya(Hagia Sophia) because these were in a courtyard open to the weather and meant to be walked on, while the ones in Ayasofya were on the walls. Also, don’t compare these to the ones in the Kariye Museum (Church of the Holy Savior in Chora), which were created eight centuries later!

The mosaics in the Great Palace Mosaic Museumare still quite surprising in their liveliness and variety: a man milks a goat, a mare suckles its foal, a monkey-like creature uses a stick to beat dates down from a palm tree, a deer bites a serpent, another serpent is held in an eagle’s claws, two dogs attack a large hare, warriors battle it out, a lion attacks an elephant….

If you plan to visit Topkapı Palace and Hagia Sophia(and who doesn’t?), as well as the Mosaic Museum, consider buying an Istanbul Museum Pass. You’ll save time and money. More…

When you exit the Mosaic Museum, you’ll be in the Arasta Bazaar on the east side of the Blue Mosque. Turn right (south), walk through the bazaar and straight downhill along Küçük Ayasofya Camii Sokak to reach the Little Hagia Sophia Mosque, built by Justinian as the Church of Saints Sergius and Bacchus around 530 AD. More… Above, a boy drives some 6th-century geese.

Below, boys get a camel ride. 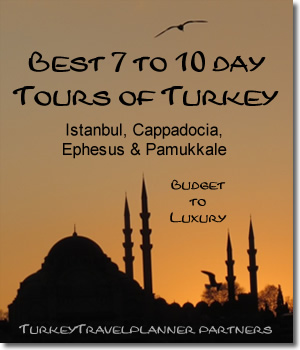 Read about romantic drama in Istanbul…