Every April since 2006, the city government in Istanbul has planted millions of tulips in Istanbul’s parks, avenues, traffic roundabouts and…really anywhere there is open ground.

In recent years, the total number planted has been 30 million, including over a half-million planted as a huge “flower carpet” in Sultanahmet’s Hippodrome (At Meydanı) in front of the Sultanahmet (Blue) Mosque.

The result is a glorious spring flower festival with brilliant splashes of color everywhere you look: April may not be as rain-free as May or June, but it usually has moderate temperatures. It’s a great time to visit Istanbul!

The tulip is one of Istanbul’s traditional symbols. Brought to the city from Iran centuries ago, it was favored and cultivated here until tulip-love became tulip mania. In the so-called Tulip Period of Ottoman history, a rare tulip variety could be sold for a breathtaking sum.

Tulips made their way from Istanbul to Europe—specifically to the Dutch Republic (Holland)—where a similar tulip mania soon consumed the imaginations—and bank accounts—of Dutch tulip-lovers.

The Istanbul Tulip Festival is not just about tulips, however. Other flowers—pansies, bluebottles, etc.—are planted in contrast and for variety in shape and color. The displays are breathtaking.

There are plenty of tulips in view in Old Istanbul, especially around the tourism nexus of Sultanahmet, but you’ll see them all over the city as well, including along the shores of the Bosphorus. An excursion to Emirgân Park (Emirgân Korusu), known especially for its tulips, is worth doing. More…

Come to Istanbul in April and enjoy the Tulip Festival, not to mention the thousand other things that make this city, for me, the most fascinating on earth. More… 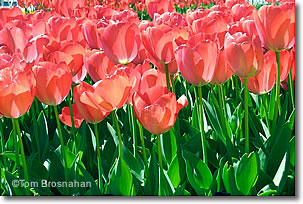