You can go from Istanbul‘s Sabiha Gökçen Airport(SAW), on the Asian side of the Bosphorus, to Atatürk Airport (IST), on the European side of the city (map), by airport bus in 2.5 hours for TL23, and see a good amount of Istanbul and the Bosphorus as you travel.

There is no non-stop airport bus service between Istanbul’s two airports, but you can take a Havataş Airport Bus from either airport to Taksim Square on the European side of the Bosphorus and transfer to another Havataş airport bus for the completion of your journey. The total journey by Havataş bus takes about 2.5 hoursminimum (more if traffic is heavy or if you must wait for the bus transfer), and costs about TL23 per person. More…

Efendi Travel will drive you from one Istanbul airport to the other in a comfortable Mercedes-Benz minivan for not all that much more than a regular Istanbul taxi, but the ride is far more pleasant, assured and safe. It’s the fastest way to go, taking about 1-1/4 hours (more if traffic is heavy), and if you’re traveling with others, it can end up costing about the same per person as the Havataş bus. It’s certainly faster than the bus.

Your private transfer begins in the airport terminal at the Customs-area exit where you will be met by an Efendi Travel staff person holding a sign with your name on it, who will assist you with your luggage. A professional driver will take you across the Bosphorus to the other airport offering snacks and beverages along the way, and will help with your luggage when you reach the other airport. The cost is the same for one to four persons—it’s not a per-person charge. This is a great value-for-money service. More…

You can now take public trains for the journey between Istanbul’s two airports. Take the KM22 city bus from Sabiha Gökçen Airport to the Kartal station on the M4 Metro line. Take the Metro to the Ayrıklı Çeşmesistation and transfer to the Marmaray. Take the Marmaray to the Sirkeci station on the European shore of the Bosphorus, then the T1 Bağcılar-Kabataş tram to the Zeytinburnu station. At Zeytinburnu, change to the M1 Metro line toward Havalimanı (Airport), and ride the Metro to the last station, right below the Atatürk Airport parking garage. The trip takes about two to 2-1/2 hours with all the changes, at a fare between TL10 and TL15, depending on how you pay. Here are maps of the system.

There are usually Istanbul taxis waiting at the airport to take passengers to the city center or the other airport. Most of the time the trip is uneventful. Sometimes the driver tries to charge more than the standard fare, or takes “the long way round.” Occasionally the driver will want to stop and usher you into a carpet or leather apparel shop from which he earns a commission. More… Below, Haydarpaşa Station, a landmark just north of the Kadıköy ferry docks. 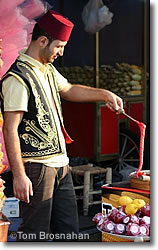