Actually, it was St Nicholas, a 4th-century Bishop of Myra, who lived and worked here, and who was later transmuted into the jolly Christmas elf called Sinterklaas in Holland (and similar names in other European countries), and later Santa Claus in North America.

An 11th-century church in Demre, now the Santa Claus Museum (Noel Baba Müzesi), once held his earthly remains, but in 1087 most of his bones were taken by force to Bari in Italy, and the remainder taken to Venice in 1100. (Churches were built in both cities to preserve the purloined relics. In 2009 the Turkish government demanded the return of the relics to Demre.)

Nicholas was born in nearby Patara, became a priest, rose to the rank of bishop, and did much of his good work here in the Roman town then called Myra, a name derived from myrrh.

Legend has it that he’d drop small bags of gold coinsdown the chimneys of houses with poor girls who were old enough to marry, but had no dowry. Another story says he’d leave gold coins in the shoes of the poor who put them out for him. Sanctified for his good works, he became the patron saint of virgins, sailors, children, pawnbrokers and Holy Russia.

Today the Santa Claus Museum (Noel Baba Müzesi) is Demre’s most visited site, but there are other things to see in this small coastal Mediterranean town. About 2 km (1.2 miles) inland are the ruins of Roman Myra, with a well-preserved theater and impressive rock-hewn tombs. Rock-hewn Lycian tombs at Demre, similar to those at nearby Dalyan, Fethiye and Kaş. The person inspecting the tomb in the white circle gives you a sense of scale.

Çayağzı, 5 km (3 miles) west of Demre just off the coastal highway, was called Andriake in Roman times, and has ruins of a plakoma, harbor, baths, churches and synagogues, as well as a decent, small beach, and several small restaurants.

Here in 2009, archeologists from Akdeniz University discovered the ruins of a 1500-year-old Roman synagogue atop a hill overlooking the harbor. A marble tablet inscribed with a menorah, shofar and bugle, palm tree and lemon tree helped to identify the building.

The 7-room Hadrian granary (129 AD) is now the Museum of Lycian Civilizations, with displays including a 16-meter-long (52-foot) Roman-era boat.

You may also choose to see Demre’s sights on your way to Kaş or Çıralı, Olimpos, Kemer and Antalya. 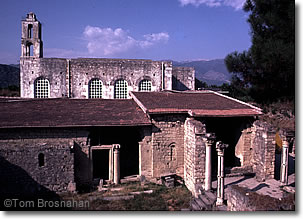 Above, a historic photo (1982) of Demre’s Church of St Nicholas. A huge shelter now covers the ancient church, but it’s still a favorite place for newlyweds—especially Russians. (Nicholas is the patron saint of Russia.) Statue of St Nicholas in the main square of Demre.