Here’s an excerpt from my humorous travel memoir, Bright Sun, Strong Tea. (The previous episode is The Blonde at the Circumcision Party.)

“COME TO ANKARA OCT 19. BRING A BLONDE,” the telegram read.

It followed by two days a letter that began “This may be the screwiest letter you’ll ever receive from Peace Corps staff….”

I saw the letter when I came in from my balcony where I had blown the minds of the neighborhood matrons by hanging out my freshly hand-laundered shirts. In Turkey men don’t do laundry even if, as they walked down the street in B.O.-redolent clothes, the paint peels from walls and dogs die in their tracks.

The letter explained that the Ministry of Tourism wanted to make a movie that would show people what tourism is and how Turks should behave toward tourists. The movie would be shown in city cinemas and village tea houses. It would help Turks to prepare themselves for the tourist onslaught that was going to begin Real Soon Now.

Tourists would bring millions of dollars, pounds, marks, francs, lire and drachmae to Turkey and save the economy, so the bearers of this flood of lucre should be treated well.

The crew shooting the film for the ministry had plenty of talented Turkish actors to use as stars, and therein lay the problem. They were Turks, not foreigners. They didn’t look, or walk, or gesture, or laugh or grimace like foreigners. In the interest of verisimilitude, the stars had to be real honest-to-goodness foreigners. They also had to be blond, because everyone in Turkey knows all foreign tourists are blond.

This caused some vexation to the director because, as everyone also knows, blond foreign actors are expensive, and he had a government budget, which is to say below-subsistence. He decided to look for a source of Cheap Blond Foreigners.

Did someone call me?

According to the conventional wisdom circulating through the Peace Corps office in Ankara, I was lounging in Istanbul, supposedly working on some hokey pie-in-the-sky guidebook project, but probably sleeping late, living in my PJs, and admiring my glorious Bosphorus view as I killed yet another bottle of cheap raki with a blonde on either arm.

I had no teaching schedule–indeed, as far as they could tell I had no schedule at all–and no obligations to anyone else. I was already receiving a munificent $135-a-month salary courtesy of the Peace Corps, so I was in effect a Cheap Blond Foreigner Already Paid For. All they need do was to send me a letter outlining the project and telling me to hop on a bus with one of my Cheap Blonde (ie, female) Foreigner pals who could be my co-star.

The letter arrived on October 17th. “Please telegraph your answer as soon as possible,” it concluded. So I did:

“YES BUT NO BLONDE. SHALL I FIND?”

The answering telegram that you read above arrived a few hours later.

I’m out on the town in Istanbul, circulating through the bars and cafes. Sharp suit, cool shades. Easily I saunter up to a pair of gorgeous blondes just arrived from Sweden, Germany, Holland. Choosing the more gorgeous of the two I croon…

The blonde not addressed looks up eagerly, her face alight, her mouth agape, and answers breathlessly “Yah! Yah!”

“Not you, pal,” I hiss dismissively. “Your good-lookin’ friend.”

Slowly an enigmatic Mona Lisa smirk glows on the lips of the more gorgeous one. She rises, takes the arm I gallantly offer, and we glide off to…uh, well, the bus station, to catch a night coach to Ankara.

Or not. Most likely not.

In fact I went to Sultanahmet right away, looked around and even spoke in tentative tones to a few female tourists, some of them blonde. Most of them had boyfriends, all of them had reservations (not to Ankara, reservations about me), and none had anything to wear but old jeans, baggy sweaters, and other down-at-heels travel garb. Therefore they couldn’t dress like a “real” tourist which, I soon learned, meant a tourist as seen through the film director’s eyes: ultra-fashionable body sheaths ending somewhere high above the dimpled knee, preferably in that murky zone north of good taste but south of pornography.

I was an utter failure at getting girls even with the ultimate killer pickup line. I climbed on the bus to Ankara alone.

As it turned out, this was not a problem. The Peace Corps office had located a Cheap Blonde Foreigner right in Ankara, the twentysomething daughter of an American diplomatic couple of Scandinavian heritage, and she was ready to roll.

She had a wardrobe full of fashionable body-sheath dresses and tiny skirts, none of which descended even within shouting distance of her beautifully dimpled knees. Not only that, besides being a certifiable Nordic blonde, she was truly gorgeous. My face might be made for radio but hers was designed with the camera in mind: full forehead, come-hither almond eyes, prominent cheekbones, Bardot-pout mouth.

I’ll call her Diana. We met on October 20th, the day after I arrived in Ankara. When I laid eyes on this woman, the shyness of my youth returned and clomped down on me like a letter from the IRS. I was knocked out. I had absolutely no clue what approach I should take with this gorgeous creature. Nonchalance? Genuflexion? Heart attack?

The film director, Nurettin Tanci, saved me from my Diana dilemma by introducing himself. He had gone to film school in England and was now working for the Ministry of Education’s Film, Radio and Television Educational Center in Ankara. He had assembled a crew which included a cameraman, an assistant, a gaffer and two drivers, one for the little Opel station wagon which was to be “The Tourists’ Car” in the movie, and one for the crew’s minibus. He explained the project.

“In the next few years many foreign tourists will arrive in Turkey. This is what we want. We want the tourists to enjoy themselves, to have good experiences. However, the Turkish people aren’t used to tourists. Most of them have never seen a foreigner. They don’t know how to act. They don’t understand foreign customs or ways of behaving. We want to help them understand foreigners and welcome them properly. So we’ll make a film and show it in local cinemas to teach the people how to welcome tourists.

“It will be called ‘A Cup of Coffee: How Should We Act Toward Tourists?’

“We have a saying in Turkey: ‘A cup of coffee gives memories for forty years.’ You two will be ‘the Farmers,’ a foreign tourist couple traveling in Turkey. You will have coffee with Turks you meet, and have nice memories for a long time.”

So I was going to get a free trip around Turkey with a glamorous companion and end up a movie star. Could this get any better?

(Next: Life on Location) 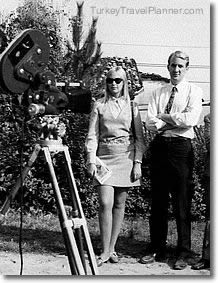 The blond(e)s face the camera….