The Ahırkapı district of Istanbul is east of Sultanahmet, down the hill through Cankurtaran, right next to the Byzantine city walls and the shore highway (Kennedy Caddesi)(map).

It’s a 10- or 15-minute walk uphill from Ahırkapı (ah-HURR-kah-puh) to the Hippodrome through Cankurtaran or along the Topkapı Palace walls, but a short taxi ride around Seraglio Point to Sirkeci Station, Eminönü and Galata Bridge.

(Unfortunately, you probably won’t be able to get a taxi to drive you up the hill to Sultanahmet—too low a fare. More…)

Though a bit farther from Istanbul’s most famous sights, Ahırkapı has its virtues:

—There are several good hotels here, some even with views of the Bosphorus, Sea of Marmara and Princes Islands from their guest rooms

—You can easily walk to the Cankurtaran suburban train station to go to Sirkeci Station, Kumkapı and its seafood restaurants, and the Yenikapı fast ferry terminal.)

If you’re looking for a small, simple apartment, Efendi Apartments is in this neighborhood. More… 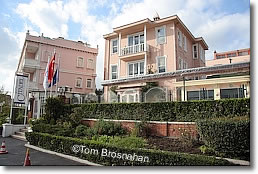