Some things are better off broken.

Antalya’s broken wonder is the Broken Minaret (Kesik Minare) of the Korkut Mosque (Korkut Camii) at the corner of Hesapçi Sokak and Cami Sokak in Kaleiçi (map). The mosque was first built as a Roman temple in the 2nd century AD, and thus did not originally have a minaret at all.

A Byzantine church in honor of the Virgin Mary was built on the temple site in the 600s, but it was badly damaged during the Arab invasions of the 700s. It was repaired and expanded in the 900s.

When the Seljuk Turkish Empire of Rum took Antalyafrom the Byzantines, the church was converted to a mosque and the minaret added, but in 1361 when Peter I, crusader king of Cyprus, took Antalya from the Seljuks it became a church again.

It became a mosque yet again during the rule of Şehzade Korkut (1470-1509), son of the Ottoman sultan Beyazit II, and continued as a place of worship until 1846, when it was destroyed by a great fire.

The temple-church-mosque now lays in ruins, but the minaret survives.

So it now stands at the southeastern end of Cami Sokak in Kaleiçi (Old Antalya), periodically repaired—but not restored—as a local curiosity and a convenient landmark. 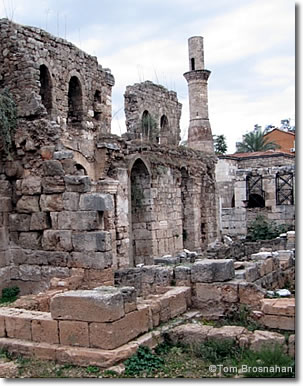