Antalya  is the most convenient base for excursions throughout the region, from Olimpos in the southwest to Alanya in the southeast (map).

Two of the easiest and most pleasant excursions are to these two cool, shady, green waterfall parks only a few kilometers northeast of Antalya. They may be crowded on summer weekends, however. More…

Perge, only a few km from Antalya, has impressive Romanruins. Side too, along with fine beaches and a resort atmosphere. Aspendos has the best-preserved Romantheater on the Mediterranean, still used for performances.

A perfect day-trip by car or tour from Antalya is to Termessos, the breathtaking ancient ruined city high in a mountain aerie, so well defended that Alexander the Greatpassed it by. You can visit fascinating Karain Cave, inhabited for 25,000 years, on the same trip. More…

Bridge Canyon National Park (Köprülü Kanyon Milli Park) is a beautiful, dramatic river gorge spanned by a stone Roman bridge. At the top of the valley is the ancient Roman city of Selge. It makes a great day trip from Antalya whether you go white water rafting or not. More…

Kemer is a modern seaside resort southwest of Antalya, but Phaselis, a bit farther down the coast, is an ancient port now in a national park, and Olimpos just beyond it is a strange and wonderful mix of forest tree-house camps, tidy small hotels, secluded beach resort and ancient ruins.

At nearby Çıralı, the famed Chimaera natural eternal flame still burns as it has for millennia.

Minibuses depart Antalya’s Otogar for all of these places regularly in the warm months, and also from the bus stop on Dumlupınar Bulvarı (D400) just north of the Antalya Aquarium on the western side of the city (map). Above, Roman theater at Aspendos, Turkey.

Below, rafting on the Köprüçay river in Bridge Canyon National Park. 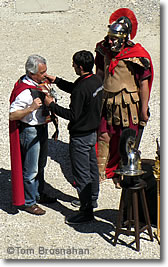