The tram you'll use the most in Istanbul is the T1 Bağcılar- Kabataş tram. (Click here for a map ofIstanbul's Metro, tram, Tünel & Funicular system.)

This route goes from the district of Bağcılar via Zeytinburnu on the shore of the Sea of Marmaranortheast through the Byzantine city walls at Topkapı(the Cannon Gate, not the palace), then eastward via Yusufpaşa/Aksaray, then past the Grand Bazaar (Kapalı Çarşı) and along Divan Yolu to Sultanahmet—theHippodrome—the historic center of Old Istanbul. 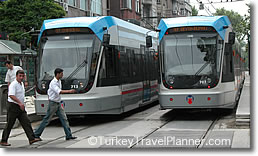 Trams on the T1 Bağcılar-Kabataş line glide along Divan Yolu in Old Istanbul.

From Sultanahmet the tram continues north past Sirkeci station and Eminönü (ferry docks), across the Galata Bridge over the Golden Horn to Karaköy Square (Galata, starting-point for the Tünel up to Beyoğlu's Istiklal Caddesi).

From Karaköy the tram continues to Tophane, near the Istanbul Modern Art Museum, then to Kabataş, with its "Sea Bus" catamaran ferry dock (closed until 2018) and Füniküler (funicular tram) to Taksim Square.

The tram line will eventually be extended northward along the European shore of the Bosphorus viaDolmabahçe Palace to Beşiktaş (ferry dock).

Use this tram and the Metro to travel between Atatürk Airport and Sultanahmet Square (click here for details)(Map).

Here's what the signboard on the front of the trammeans:

Bağcılar: Westbound/outbound tram going all the way to the end of the line, stopping at Zeytinburnu, where you transfer to the Metro to go to Atatürk Airport or the Otogar (bus terminal).

CBG.A.Ö.Y: Westbound/outbound tram going only as far as Cevizlibağ-Atatürk Ögrenci Yurdu station (just outside the city walls), not all the way to Bağcılar. You can take it for any destination within the city walls, but if you're going to Atatürk Airport, you'll have to get out at Cevizlibağ (the last stop) and wait for a Bağcılar tram to take you four more stops to Zeytinburnu.

Eminönü: Eastbound/inbound tram going into the center of the city (Laleli-Üniversite, Beyazıt-Kapalı Çarşı, Sultanahmet, Sirkeci) but only as far as the Eminönü ferry docks, not across the Galata Bridge to Karaköy.

Kabataş: Eastbound/inbound tram going to the end of the line at Kabatas, past all the stops, beyond Eminönüand across the Galata Bridge to Karaköy (change for Tünel), Tophane and Kabataş.

Istanbul's other prominent tram is the Nostalgic Istiklal Caddesi tram that runs along the former Grande Rue de Péra in Beyoğlu, from Tünel Square via Galatasaray Square to Taksim Square. More...