Somewhere deep in the earth beneath Pamukkale and the ancient Roman city of Hierapolis lies a vast source of water heated by volcanic lava. The water dissolves pure white calcium, becomes saturated with it, and carries it to the earth’s surface, where it bursts forth and runs down a steep hillside.

Cooling in the open air, the calcium precipitates from the water, adheres to the soil, and forms white calcium “cascades” frozen in stone called travertines.

The water has been bursting forth at Hierapolis/Pamukkale for more than two millennia. The Romans built the spa city of Hierapolis so citizens could come and enjoy the health benefits of the hot mineral water. The beauty of the travertines was just a bonus.

When I first visited Pamukkale in 1967, the water was still pouring freely in floods over the cliffs, refreshing and re-purifying the white travertine cascades. Shopkeepers put bottles of local wine into the channels of hot water, and after a few days, each bottle would be completely coated in pure white calcium. What the wine tasted like I can’t say, but the bottles were beautiful in their coats of pure white. 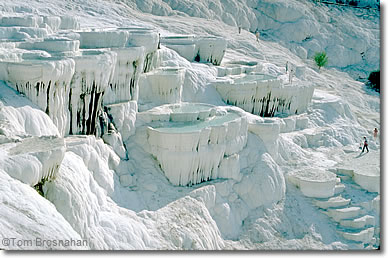 Pamukkale travertines in the 1990s when they were still alive with running water.

The road from Denizli led right up the travertine slope to the plateau, bringing day visitors and overnight guests by car, minibus, city bus, taxi and on foot to the Antique Pooland to larger public swimming pools just to the south of it.

Simple motels rose on the edge of the calcium-made plateau to take advantage of both the hot mineral waters and the panoramic views of the broad, fertile valley below. Simple tea gardens opened to provide resfreshments and a place to sit in the shade of pine trees and oleanders.

As the number of visitors—and especially budget-conscious backpacking visitors—increased, the tiny village at the base of the travertines became a town. Local residents opened house pensions and simple hotels and restaurants to host the visitors.

In the 1980s the local authorities decided to develop the spa in a more systematic fashion. By the 1990s the simple motels were razed and the land on which they had stood became a park. The road up the slope was converted into a series of pools in which visitors were allowed to walk, splash, play and even soak. New vehicle entrances were built at the north and south ends of the plateau. The Roman baths were converted to a good smallArcheological Museum.

Much of the warm, calcium-rich water that built the travertines has been diverted to other (usually commercial) uses, so today most of the travertine cliffs are dry.

However, the travertines are still beautiful, the Hierapolis ruins still interesting, the fine theater still an excellent, well-restored example of Roman architecture, the museum still good, and a swim in the Antique Poolstill a memorable experience.

Pamukkale may not hold you for more than one night, but you’ll enjoy that night, and the days on either side of it. You can even come just for the day, then return to where you came from, or travel on. More… Below, the regimented wading pool and walking track of today.