The journey by road between Old Istanbul and Sabiha Gökçen Airport can take as little as 40 minutes under the best conditions (06:00 am on a weekend morning, for example), but at other times you must allow 60 to 90 minutes, and perhaps two hours or more.

The Istanbul Metro should soon be running all the way from Kadıköy, on the Asian shore of the Bosphorus, to Sabiha Gökçen Airport.

By the way, there’s a good hotel right next to the airport terminal at Sabiha Gökçen. More…

The airport private transfer service operated by Efendi Travel is an exceptional value: not much more than a taxi, but far more comfort, convenience and security—and no hassles over the fare. More…

The Kadıköy ferry dock has a Metro station, and is served by TurYol, Şehir Hatları, and Dentur Avrasyaferryboats from Eminönü and Karaköy (for Sirkeci and the T1 Bağcılar-Kabataş tram).

The Kadıköy ferry dock also has a major city bus station for buses along the Asian Bosphorus shore to the Harem Otogar (intercity bus station), and Üsküdar.

HavaBüs SG-2 goes to Taksim Square in Beyoğlu on the European shore every 30 minutes on the hour and half hour from 04:00 am until 01:00 am. The journey can take as little as 90 minutes, or much longer, depending on traffic. The one-way fare is TL18.

From Taksim Square you can take other HavaBüs buses or the Metro to the Yenikapı fast ferry terminal or to Atatürk Airport.

A cheaper, but slower and less comfortable, alternative is to use public transit:

The E-10 and E-11 city buses will take you from the airport to the ferry docks in Kadıköy in about an hour for only a few liras (buy your tickets from the IETT bus booth near the buses). Note that these buses are often uncomfortably crowded with passengers, their luggage, and locals.

An alternative is to take the E-10 bus to the Kartal station on the M4 Metro line, then the Metro either to the Kadıköy ferry dock (terminal station) for the ferryboat to Eminönü, or to the Ayrılık Çeşmesi station to transfer to the Marmaray. Take the Marmaray to the Sirkecistation on the European shore of the Bosphorus, then the T1 Bağcılar-Kabataş tram to the stop nearest to your hotel. Here are maps of the system.

The Kadıköy ferry dock has a Metro station, and is served by TurYol, Şehir Hatları, and Dentur Avrasyaferryboats from Eminönü and Karaköy (for Sirkeci and the T1 Bağcılar-Kabataş tram). Buy a jeton (token), or use an Istanbulkart at the fare booths.

If you’re arriving for the first time in Istanbul, I highly recommend the ferry voyage: it’s the perfect first glimpse and introduction to the city (map).

The daytime fare may be about TL100 to Taksim Square, TL110 to TL113 to Sirkeci or Sultanahmet, TL120 to the Büyük Otogar (main bus terminal). Istanbul taxis are not my favorite means of transport. Read this…

Several travel agencies have organized to provide minibus transport from Sultanahmet to Sabiha Gökçen Airport. Contact your Sultanahmet hotel for information. The vans depart several times daily and are far cheaper than a taxi. (Shuttle vans are not convenient for going from the airport.)

High-speed trains zoom between Istanbul, Eskişehir, Ankara and Konya. The Istanbul terminus is near the seashore in Pendik, a few kilometers south of Sabiha Gökçen Airport. You can go there by city bus. More…

Going from Old Istanbul (Sultanahmet, Sirkeci, etc.) to Sabiha Gökçen Airport to catch a flight, you should prefer either the airport private transfer service (because they know how to predict the traffic flow and time required for the trip), or the Marmaray, Metro and Havataş airport bus.

Start your trip to the airport a minimum 3 hours before your flight departure time; 3-1/2 is better, 4 is secure.

Take the Marmaray from Yenikapı or Sirkeci to Ayrılık Çeşmesi, then the M4 Metro line to Kadıköy, where you board the Havataş airport bus to the airport.

For a last Bosphorus ferry cruise goodbye to the city, and allowing even more time, instead of the Marmaray you could take a ferryboat from Eminönü to Kadıköy, then the Havataş bus to the airport.

Here are instructions for going to Atatürk Airport on the European shore. So…you got to Sabiha Gökçen Airport. How do you get somewhere else? 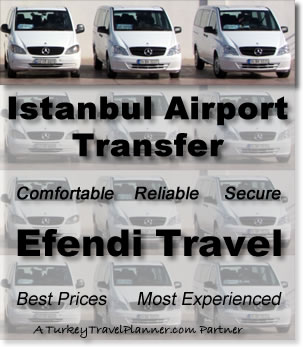